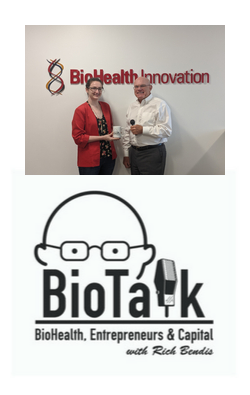 On this episode, Carolyn Yarina, CEO & Co-Founder of Sisu Global Health, chats about her Career, Sisu’s Technology, and Thoughts on Entrepreneurism with BioTalk Host Rich Bendis

Carolyn Yarina, CEO and Co-Founder of Sisu Global: Carolyn is a two-time founder/CEO with a proven track record of execution. She has raised nearly $3M from investors like Camden Partners & Revolution's Rise of the Rest Seed Fund. Carolyn has been featured in USA Today, Forbes, TEDxMidAtlantic, and has received awards like Maryland’s Innovator of the Year, Baltimore Business Journal Tech 10, and Baltimore’s Top 10 BioHealth CEO.

Prior to Sisu, Carolyn founded a medical device non-profit working with rural mobile clinics in India. She raised over $100k in cash and in-kind services and was featured in Entrepreneur Magazine and Business Insider. While she was earning her Chemical Engineering degree at the University of Michigan, Carolyn was named Entrepreneur of the Year for her first company.

Summary of Sisu Global: Sisu Global is the future of medical devices in the rapidly expanding market of emerging economies. With five technologies in its portfolio, Sisu is proving its model with Hemafuse: a handheld device that enables clinicians to recycle blood from patients with internal bleeding, reducing the need for donor blood. This year Sisu began selling Hemafuse in Africa through Kenya’s largest med-pharma distributor, Surgipharm, and in partnership with Amref, the largest Africa-based international NGO. Read how Hemafuse combats internal bleeding deaths in our recent feature: https://www.standardmedia.co.ke/article/2001342291/amref-adopts-hemafuse-to-help-combat-internal-bleeding-deaths