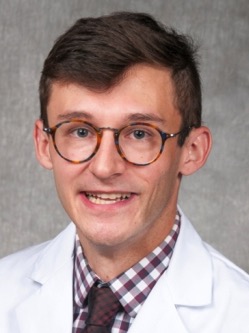 First awarded in 2016, the International Biomedical Research Alliance’s Innovation Award recognizes novel solutions in biology or medicine and acknowledges discoveries of unusual importance, application, or magnitude that make use of new or unusual methods, paradigms, or approaches to solve important problems in biology or medicine. This year, the Innovation Award was graciously sponsored by BioHealth Innovation Inc. and presented to Michael Metrick. A graduate of James Madison University, Michael is working toward completion of his PhD in the NIH Oxford-Cambridge Scholars Program. The Scholars Program is a novel, dual-mentored, and international collaboration between the National Institutes of Health (NIH) in Bethesda, Maryland and the Universities of Oxford and Cambridge, respectively, in the United Kingdom.  The Scholars Program’s elite students conduct their own biomedical research project in an average completion time of 4.2 years.  Michael is in the MD/PhD track and his MD is in progress at the University of Illinois at Chicago.  Michael is mentored by Prof. Byron Caughey at the NIH’s National Heart Lung and Blood Institute (NHLBI) Rocky Mountain Laboratory in Hamilton, Montana and Prof. Michele Vendruscolo at the University of Cambridge.

“I couldn’t believe it when I heard my name announced at the 2020 NIH Global Doctoral Partnerships Research Workshop Awards Ceremony,” Michael stated. “It wasn’t until I received messages from my peers congratulating me that it sunk in! My thesis project is basic science oriented and draws on many fundamental chemical and physical principles to better understand biology. It means a lot to me to have this sort of basic science work recognized.  I hope it also encourages others who might feel overshadowed by the more abundant biological and translational type of work. I'm incredibly grateful for the opportunity to conduct this work in labs that allowed me to freely pursue my ideas, which I recognize as a rare privilege that I'm trying to make the most of. Thank you, BioHealth Innovation, for sponsoring this award.”

Recently, the self-propagating nature of prions has been leveraged to develop ultrasensitive biomarker assays (called RT-QuIC) that allow accurate antemortem diagnosis of prion diseases. By exploiting these advances, Michael has adapted the RT-QuIC to study tauopathies and synucleinopathies. He proposed and executed systematic analyses of multiple factors that control the performance of multiple types of RT-QuIC assays for pathological aggregates of tau and α-synuclein in biospecimens. This work markedly improved the analytical sensitivities and specificities of key assays, including those for Alzheimer’s, Pick’s, progressive supranuclear palsy, and Creutzfeldt-Jakob disease in humans, and chronic wasting disease in cervids. Michael innovated the use of FTIR spectroscopy of tau RT-QuIC products to differentiate distinct disease-associated conformers, or strains, of tau aggregates.  As a result of this work, Michael has developed an additional project, which is focused on dissecting the physical underpinnings of how amyloid proteins aggregate to form distinct conformations that give rise to different diseases. “We're hoping that this methodology can accelerate this analysis by several months’ time, which can allow us to more quickly identify and analyze different small molecule inhibitors of the tau amyloid aggregation process in vitro,” said Michael.

Richard Bendis, BioHealth Innovation Inc.’s Founder, President and CEO stated “Michael is the type of talented early career scientist that our regional ecosystem needs.  We were proud to sponsor this year’s Innovation Award for a deserving student in the NIH Oxford-Cambridge Scholars Program.”

BioHealth Innovation, Inc., is a regional innovation intermediary which supports the transformation of research projects into new business opportunities in partnership with the region’s rich assets, institutions, and entrepreneurial community. BHI achieves this goal by being a catalytic partner in the economic development ecosystem. Learn more at  www.biohealthinnovation.org.

Created in 2001, the NIH Oxford-Cambridge Scholars Program is a collaboration between the NIH and the universities of Oxford and Cambridge to revolutionize the way in which the most talented biomedical PhD and MD/PhD students are trained. Participants in the program receive accelerated training and work on their own collaborative research project to address critical biomedical research problems.  Trainees graduate in an average of 4.2 years with a PhD degree.  To learn more visit www.oxcam.gpp.nih.go

About the International Biomedical Research Alliance

Founded in 2005, The Alliance’s mission is to support the NIH Oxford-Cambridge Scholars Program and associated global PhD and MD/PhD training programs based in the Intramural Research Program of the NIH, America’s largest biomedical research organization. Our goal is to assure the financial viability and scientific excellence of the Scholars Program by supplementing government funding. The Alliance supports events, awards, and career developed initiatives designed to enrich the Scholars Program and broaden the perspectives of its students as they train to become the next leaders in biomedical research. For more information, please visit www.biomedalliance.org.