In addition, MCDED, as part of BIOMaryland, again hosted the Convention's annual gala event held June 20 at the Boston Museum of Fine Arts.  The gala attracted thousands of BIO 2012 attendees giving them an opportunity to network and mingle in a relaxing, festive environment prominently showcasing the BIOMaryland brand.  We also sponsored raffles for 6 months of free lab space in one of the county's premiere incubator facilities and for tickets to this week's AT&T National at Congressional Country Club in Bethesda.
Montgomery County's biotech sector had an impressive presence at BIO 2012.  Of the nearly 30 BIOMaryland Pavilion exhibitors, about half were County businesses or entities.  Representatives from nearly 70 county organizations, companies, and federal agencies attended the Convention, including the following Montgomery County Business Innovation Network (BIN) current and/or graduate companies: Clarassance, Inc., Creatv Microtech, Inc., Daewoong America, HeMemics, Rexahn Pharmaceuticals, Inc. and SuperNova Diagnostics.  Additionally, Lentigen Corporation, a biotechnology company specializing in the development and manufacture of biotherapeutics and vaccines using its proprietary lentiviral gene delivery technologies, announced the opening of its 5,000 sq. ft. GMP Manufacturing Facility located at the company’s headquarters in Gaithersburg.
The June 20 keynote luncheon panel entitled “Biotech and Big Pharma — What’s Next?” featured Rachel King, CEO of Gaithersburg-based GlycoMimetics and the newly announced incoming Chair of BIO for 2013, and Tom Watkins.
These are just some of the targeted activities the County's team managed, participated in and/or helped promote during BIO 2012 - the biotech industry's largest and most important gathering of the year attracting more than 15,000 attendees from around the world.  Below are some pictures and video clips from the Convention we'd like to share with you. 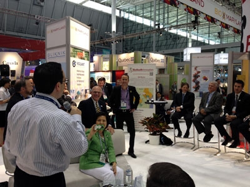 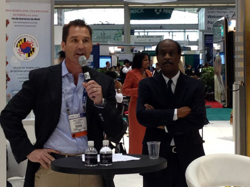 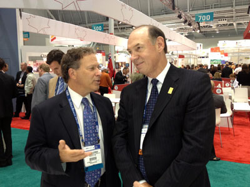