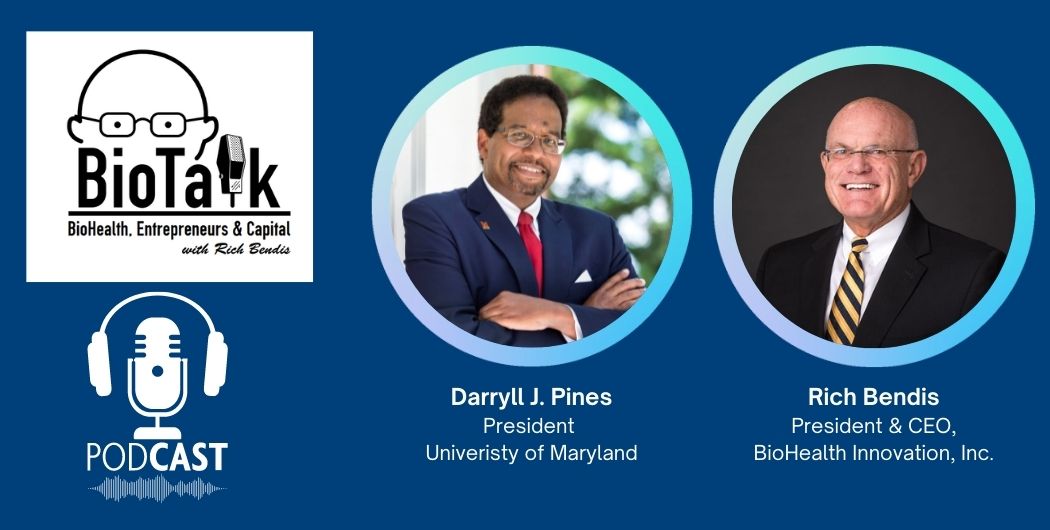 Darryll J. Pines, President, University of Maryland, Joins BioTalk to discuss all things relating the University to the BioHealth Capital Region from Quantum to Workforce Development to Diversity and Equality

Darryll J. Pines serves as president of the University of Maryland as well as the Glenn L. Martin Professor of Aerospace Engineering.

Formerly the Nariman Farvardin Professor of Engineering and dean of UMD’s A. James Clark School of Engineering, where he has been on the faculty since 1995, Pines amassed a record of academic leadership and research accomplishments that have dramatically elevated the school’s rankings and stature nationally and internationally.  In 2019, he was elected to the National Academy of Engineering for his “inspirational leadership and contributions to engineering education.”

Students have consistently taken top honors in the U.S. Department of Energy’s Solar Decathlon, placed fifth in Elon Musk’s global Hyperloop pod design competition and hold the world record for human-powered flight duration. Among other out-of-the-classroom opportunities, the Clark School’s Engineers Without Borders chapter is considered one of the nation’s best. The school also launched Startup Shell, the first student-run business incubator on a university campus in the United States, and its students helped create two major hackathons, Bitcamp and Technica, the first all-female and non-binary hackathon on a university campus.

As a result of investments in targeted recruitment, advising, STEM outreach and its signature Keystone Engineering Education Program, the Clark School’s one-year undergraduate retention rate stands at 91% and its five-year graduation rate at 75%, which rank in the top 10 among public flagship universities in the United States.

Pines also made diversity a hallmark of his tenure as dean. As a co-principal investigator, the university became a National Science Foundation (NSF) ADVANCE grant recipient to further develop a culture of inclusive excellence, focused on improving work environments, retention and advancement of tenured and tenure-track women faculty in ways that improve the culture for all faculty. At the engineering faculty level, the number of tenured/tenure-track women faculty more than doubled from 18 to 37, and the number of under-represented minority faculty increased from 11 to 19. At the undergraduate student level, the number of enrolled women undergraduates rose from 18% to 26.5%, and the number of enrolled underrepresented minority undergraduate students grew from 9.5% to 16%. According to Diverse Issues in Higher Education, the Clark School ranks among the top 10 in conferring the most B.S., M.S. and Ph.D. degrees to African-American students.

Pines has testified before Congress about the importance of K-12 STEM education for all students, and led an initiative to pilot a first-of-its-kind, nationwide, pre-college course on engineering principles and design. The program, Engineering For US All (E4USA), was made possible through a $4 million NSF grant. In addition, Pines in 2015 served as chair of the National Academy of Engineering Frontiers in Engineering Education Symposium.

The Clark School led the university in fundraising while Pines was dean, raising $240 million of the achieved $1 billion goal of the Great Expectations campaign ending in 2013. Among the results was A. James Clark Hall now a hub on campus and across the state for bioengineering. In the current Fearless Ideas campaign, Pines and his leadership team secured a $219.5 million investment—which in 2017 was the sixth-largest gift ever to a public university—from the A. James & Alice B. Clark Foundation. The Building Together: An Investment for Maryland gift is funding need-based scholarships campuswide, as well as graduate fellowships, faculty positions, infrastructure and other initiatives. One signature element of this investment is support for the Emilio Fernandez IDEA Factory, an innovative facility to encourage transformative ideas that have a positive impact on people and society.

Prior to his promotion to dean, Pines led the Department of Aerospace Engineering for four years, taking a leave of absence from the University of Maryland from 2003 to 2006 to serve as a program manager for the Tactical Technology Office and Defense Sciences Office at the Defense Advanced Research Projects Agency (DARPA). He also held positions at the Lawrence Livermore National Laboratory (LLNL), Chevron Corp. and Space Tethers. At LLNL, Pines worked on the Ballistic Missile Defense Organization’s Clementine spacecraft program, which discovered water near the south pole of the moon. A replica of the spacecraft now sits in the National Air and Space Museum.

Pines’ research focuses on structural dynamics, including structural health monitoring and prognosis, smart sensors, and adaptive, morphing and biologically inspired structures as well as the guidance, navigation and control of aerospace vehicles. He holds seven co-authored patents with his students and collaborators.

In recognition of his contributions to the field, Pines was named a fellow of the American Institute of Aeronautics and Astronautics, American Society of Mechanical Engineers and Institute of Physics. He chairs the Engineering Advisory Committee for NSF’s Engineering Directorate and sits on the Board of Trustees for Underwriters Laboratory not-for-profit arm. Pines received a B.S. in mechanical engineering from the University of California, Berkeley. He earned M.S. and Ph.D. degrees in mechanical engineering from the Massachusetts Institute of Technology.