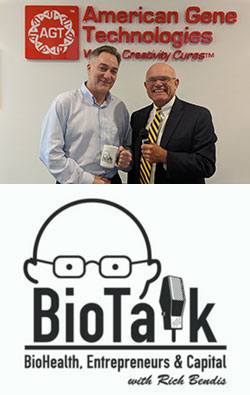 Jeff earned his BA degree in Economics from Harvard in 1981. He has more than 30 years of business and entrepreneurial experience including founder or executive positions at a variety of Silicon Valley startups. Several of his companies were taken public and/or sold to public companies. In 2007, he met Dr. Roscoe Brady, an accomplished research scientist at National Institute of Neurological Disorders and Stroke (NINDS) and founded American Gene Technologies with the mission to transform peoples’ lives with genetic medicines. Jeff Galvin’s current focus is to grow AGT and he expects AGT’s patented, lead candidate for an HIV Cure to enter the clinic in 2019. AGT is a gene and cell therapeutics company with a proprietary lentiviral platform targeting major diseases, including HIV, Phenylketonuria (PKU) and cancer. The company has a diverse portfolio of patent filings surrounding key tools and components in viral vectors, gene therapy, and regenerative medicine. AGT’s immuno-oncology approach of stimulating gamma-delta (γδ) T cells to attack a variety of cancers has recently been awarded four patents. In collaboration with Stanford Medical School’s Dr. Dean Felsher, this novel approach to stimulate the body’s immune system to attack solid cancer tumors is showing promising results in animal models and is expected to enter human trials in the next 24 months.