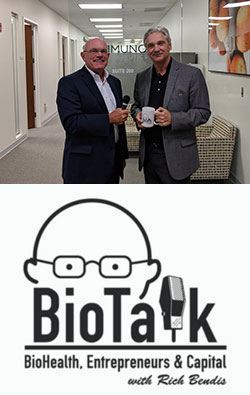 Dr. Bill Hearl is the Founder and Chief Executive Officer of Immunomic Therapeutics, Inc. (“ITI”).  He is an experienced and successful scientific businessman and bio-entrepreneur, having founded both ITI and formerly Capital Genomix in 2000.   Dr. Hearl has moved ITI steadily forward from an initial license agreement with the Geron Corporation in 2006 to an animal health license in 2012 and then most recently to two license deals with Astellas Pharma for the treatment of allergies, one for Japanese red cedar and a second global allergy license.  The second deal brought ITI an upfront payment of $300,000,000 and established the Company as one of the leading entities in nucleic acid research.   Dr. Hearl funded the Company by following a strategy of seeking a series of angel investment rounds which raised in aggregate over $12 million to drive the development of its allergy products.   Prior to founding ITI and Capital Genomix, he was a senior executive at Kirkegaard & Perry Labs and then held various R&D positions at Life Technologies and Pharmacia.   Dr. Hearl holds a Ph.D. in Biochemistry from the University of Tennessee (Oak Ridge & Knoxville) and holds multiple patents in the field of gene immunization.