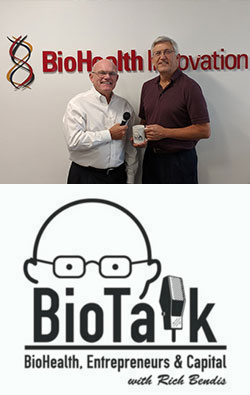 Jeff Gallagher, CEO of Virginia Bio sits down with BioTalk host Rich Bendis to discuss accomplishments, challenges, and initiatives in his state and the BioHealth Capital Region.

Jeff is responsible for leading the premier statewide trade group that promotes the considerable scientific and economic impact of the life sciences industry in the Commonwealth of Virginia. Prior to taking on the leadership of Virginia Bio in May 2012, Jeff was a co-founder and served as VP & General Counsel for Lyotropic Therapeutics. This small specialty pharma company used its proprietary formulation technology to create new drug products based on both NCIs and already approved API for license, further development and commercialization by mid and large pharma. Previously he practiced corporate law in Richmond, focusing on new technology company formation, international business and intellectual property transactions. He was a co-founder and longtime Chairman of the Richmond based nonprofit World Pediatric Project. He holds an A.B. in Government from Harvard, a J.D. from the University of Wisconsin Law School, and an LL.M in Public International Law from the University of Virginia School of Law. He resides with his family in the Ginter Park area of Richmond, VA.